Hey, good afternoon. This is Patrick Findaro with Visa Franchise. I’m the managing partner at Visa Franchise for the last five years. We’ve been helping investors from across the world find and analyze franchises that are eligible for the E-2 investor visa. We’ve been getting a lot of questions from current clients, prospective clients, immigration lawyers that we work with just about general E-2 visa numbers. We’ve looked very often at the statistics provided by the department of state. They provide a lot of useful information on a monthly basis about visa issuances across different non-immigrant categories by nationality, as well as what posts the approval was at. So, for example, we reviewed the numbers for October 2020, which is the first month of the 2021 government fiscal year. The fiscal year for the United States government, as you might know, starts on October 1st, which is not a calendar year as many companies follow or just people think about the start of the year.

First month of the government year for the U.S. In October 2020

So it’s the first month of the government year for the U.S. In October 2020, for example, there were two Chinese nationals, presumably dual nationals, that were approved for the E-2 visa. And this is available on the government site. Japanese nationals weigh over a thousand. In Tokyo alone, there were 802 E-2 visas issued in October of 2020. So we reviewed the statistics. Us at Visa Franchise have had multiple clients in October approved and issued E-2 visas across the world. Looking at Europe and Asia, we’ve had a couple of approvals for all different types of businesses across the United States.

So just to give an example in Toronto, and let me share my screen. In Toronto, we’ve seen…this is from the government site I downloaded, the U.S. State Department, October 2020. FY, fiscal year, 2021, like I mentioned, it’s the first month of the government fiscal year. At Toronto alone, you’ve had 182 E-2 visas approved. And then when you look at…when you combine that with Calgary, with Toronto, there’s well over 200 E-2 visas issued in October in Canada alone. When you look at Japan, the number is over 1,000. Looking at Seoul, Korea, there were over 300 E-2 visas approved. 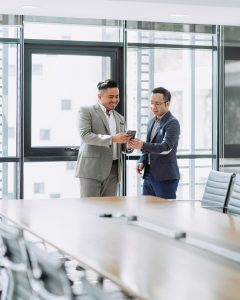 Interviews, so looking at the total, we have 44 different posts that have issued E-2 visas in the month of October. So last month, October 2020, there were 44 posts, consulates and embassies across the world that issued E-2 visas. And this could be anywhere from 182 visa issued and Columbia, Australia, Uruguay. Uruguay presumably dual nationality, as a dual national, as Uruguay does not have E-2 visa, but there are a lot of Italian dual nationals, Argentinian dual nationals, residing in Uruguay.

Montreal, and Georgia, and then going up the list, you can see, it starts really creeping up when you hit these consulates that are high volume E-2 visa posts, like Tokyo, Seoul, Frankfurt, Toronto, Paris, Madrid, even Rome, London. So this is really positive that Ciudad Juarez, 25 E-2 visas issued out of Ciudad Juarez in Mexico.

E-2 visa issuances pick up since the pandemic.

So this is really positive news that we have seen, E-2 visa issuances pick up since the pandemic. We have had multiple approvals. Unfortunately, still a lot of the Latin American consulates are slow to schedule E-2 visa interviews. I believe we have about 25 E-2 visa investors, just waiting to get their interview schedule. And you have some consulates and embassies that are taking a lot longer than others. Some that it’s taking two weeks to schedule, others that it’s TBD, and they’re not even getting back to an immigration attorney who’s following up with the consulate on the application that they submitted on behalf of their client, and other ones where it’s taking four months to get the interview for the E-2 visa investor.

So stay tuned, like this video, share it if this was informational to you. We’re probably gonna be given a monthly update on E-2 visa issuances across various consulate posts. If you’d like it more on a nationality level, like I mentioned, Japanese nationals had over 1000. Other nationals, it was significantly lower, and the single digits, you know, say tune and write in the comment box, and what we can just dissect the data. And we have a full team of analysts that are most focused on analyzing franchises and businesses eligible for the E-2 visa, but we can shift resources at times to see the government data that is being released on the E-2 visa side, which is the visa of choice for the majority of our clients at Visa Franchise.

Again, this has been Patrick Findaro, managing partner and founder at Visa Franchise, and I hope you enjoyed today’s video, and also take a look at the back of the screen and you can see all the E-2 visa countries painted in a dark blue. Hope everyone has a great day, and thanks again.