Exactly one century ago in 1916, our great-grandfather, then known by the name of Salvatore Fundaro, arrived by ship to New York from Alcamo, Sicily. At 10 years old, he was the eldest of the 4 children arriving with their mother after a long journey. His father had worked on the docks of New York as a longshoreman for 2 years to save money to provide passage to the USA for his wife and children. This family was in pursuit of the “American Dream” and was willing to take a big risk to seek a better life.

The day after his family arrived, tragedy struck. Salvatore’s father was killed accidentally by a truck at a New York pier. The family was devastated. With no money and unable to speak English, Salvatore’s mother sent the two girls to live with relatives and the two boys to Saint Vincent’s orphanage in Brooklyn. Soon thereafter Salvatore’s mother died as well.

Disgusted with his relatives for not caring for him and his brother, Salvatore changed his name to Theodore Findaro.  He greatly admired former President Theodore Roosevelt who was an American hero. Essentially, he had “Americanized ” his name and his identity through this family crisis.

Like many immigrants of all socioeconomic backgrounds, Theodore was undeterred by his circumstances.  He was a hard worker, an excellent student and kept his faith and devotion to his family burning strong.  He developed job skills as a clothing cutter in the garment industry where he made his lifelong career.  He was a master negotiator whether purchasing clothes for his family or negotiating contracts as a labor union leader. 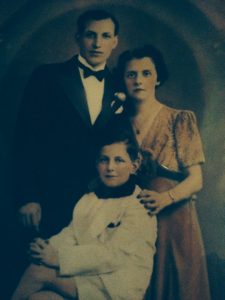 At the age of 19, Theodore married Clara Bucalo, the daughter of immigrants from Menfi, Sicily. He became a homeowner.   Ultimately their son became a physician and their daughter a nurse. He loved God, his country and American baseball.   Nothing was more important to him than making sure his children and grandchildren were educated so they could create opportunities for others.

At age 23, Theodore became a U.S. citizen. This was one of the happiest days of his life. He carried the document with him for weeks flaunting to friends and colleagues. You can still see the creases on the certificate of citizenship.

In the year that Jack joined Visa Franchise, 100 years after his great-grandfather’s arrival, 6 grandchildren, and 10 greatgrandchildren are now thriving in the United States. We are all forever grateful for the trailblazing of our great grandfather and other family members who came from Italy as well as Ireland. 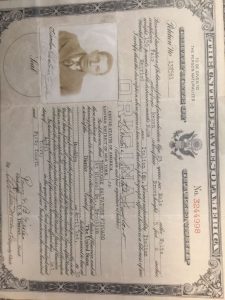 Inspired by our Brazilian clients seeking their Italian citizenship for the E-2 investor visa, we recently claimed our right of Italian citizenship*. We were quite fortunate our father had gone through the process a few years ago. It has already come in handy on a recent trip to London where we saved hours going through the EU immigration line (let’s see how long that last in light of Brexit!). Many countries have visa free travel for Italians such as Brazil whereas with an American passport you need a visa. In the end, it provides flexibility for travel, living, work and studies, not just for me but for future generations.

Like our great grandfather Theodore’s family, modern day immigrants are seeking a better life for their families when exploring a move to the USA.  At Visa Franchise we are carrying out the spirit of our ancestors In helping foreigners find investment opportunities, jobs, education, security and overall better lives for their families. The American Dream lives on.
*In light of the recent economic and political crisis in Brazil, many of our Brazilian friends and clients are seeking their Italian citizenship. They mostly start this arduous process to recognize their right to citizenship because Italy has a treaty of commerce and trade allowing for the E-2 investor visa. This investor visa permits a foreigner to live and work in the U.S. renewable every 5 years. Many of them have great-grandparents born in Italy as is the case with our family.

Visa Franchise guides investors in identifying and analyzing the best investment opportunities tailored to their specific objectives. The focus of the firm is on franchises that qualify for the E-21 and EB-5 visas2. Visa Franchise is the trusted advisor of clients from all over the world when it comes to helping them find the business opportunity that best meets their investment and immigration goals. Visa Franchise takes into consideration their capability, experience, and size of investment to ensure that they choose the best possible option for their unique, individual situation. Visa Franchise is based in Miami, Florida with a second office in Orlando, Florida.