At Visa Franchise, we advise many clients who invest in U.S. franchises, qualifying for the E-2 Investor Visa.  Most of our clients both experience success after the initial set up of their franchise and love living in the U.S.   However, they remain concerned with how their children can continue residing in the U.S. and how the entire family can eventually gain a green card. Because of these client concerns, Visa Franchise strongly supports proposed E-2 visa legislation that provides a prescribed path to permanent residence and eventually U.S. citizenship.

On July 18, 2017, Congressman John Rutherford of FL introduced legislation to facilitate E-2 visa holders’ green card applications. The bill, H.R. 3265, would allow the children of E-2 visa holders to remain in the United States until they are 26 and apply for work authorization. Also, after 10 years of running a successful U.S. business or franchise, they are eligible to apply for a green card. Currently, E-2 visa holders have 5+ possibilities to obtain U.S. permanent residence but none of these options provide a direct, prescribed path to permanent residence.

Congressman Rutherford proclaimed, “E-2 visa holders are entrepreneurs bringing their abilities, resources, and jobs to the United States. They pay taxes and invest their livelihood into the communities they serve. They deserve to be able to plan for their businesses, employees, and especially their families. I want to change this outdated law so they can continue to create jobs and be fully integrated into the communities they have invested so much. This bipartisan legislation is a much needed update to current immigration laws that will provide opportunities for entrepreneurs to establish small businesses and roots in our communities.” 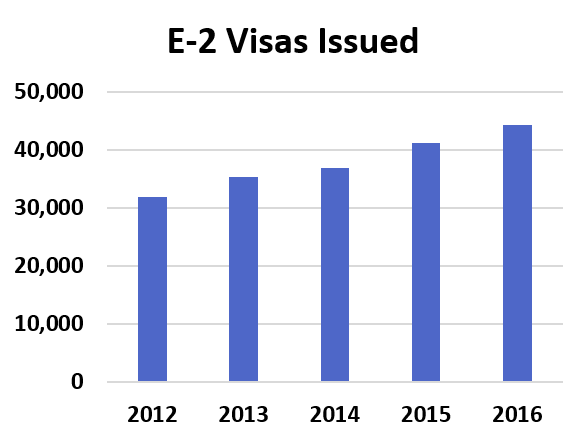 The approval rates for the E-2 visa are much higher than other employment or investor visas like the H1-B , L-1 and EB-5. In 2016, the approval rate remained high at 92% according to State Department figures. This includes E-2 visa holders who are reapplying for their visa after ~5 years. This suggests that their E-2 visa businesses have a high rate of success as they would not be able to extend their visa otherwise.

U.S. Citizens and Company Who Benefit from E-2 Visa Holders

Our clients continue to invest in and operate franchises in industries like healthcare, real estate, pet care and ice cream, amongst others. The U.S. economy benefits from these E-2 franchise investments and Congressmen like John Rutherford are noticing. For example, these franchise businesses employ U.S. workers (who might otherwise be jobless) and contribute to profits of U.S. suppliers and manufacturers. Franchises in industries like fitness and health & beauty provide increased well-being to many Americans by helping improve their mental and physical state. Moreover, U.S. franchisors  continue to welcome, and partner with, foreign nationals to expand their businesses across the United States. Moreover, U.S. franchisors constantly applaud our client’s entrepreneurial spirit and the positive impact they have on the wider franchise system.

Legislative Analysis of the Bill

For those eager to know the exact proposed changes to the law, we had a legislative analyst review the key differences between the current existing law and proposed amendments:

1990) or, is actively in the process of investing, capital in an amount not less than the amount

specified in subparagraph (C), and

(ii) except as provided in subparagraph (E) (i), in which such alien has invested (after the date of the enactment of the Immigration Act of 1990) or, is actively in the process of investing, capital in an amount not less than the amount specified in subparagraph (C), and

‘‘(i) IN GENERAL.—In the case of an alien who has been present in the United States in the status of an alien described in section 101(a)(15)(E)(ii) for at least 10 years the alien is deemed as satisfying the requirement of subparagraph (A)(ii) if the enterprise has created full-time employment for not fewer than two individuals described in such subparagraph (A)(ii).

Aliens Not Subject to Direct Numerical Limitations. – Aliens described in this subsection, who are not subject to the worldwide levels or numerical limitations of subsection (a), are as follows:

(C) Aliens whose status is adjusted to permanent residence under section 210, or 245A.

(D) Aliens whose removal is canceled under section 240A(a).

(A)(i) an ambassador, public minister, or career diplomatic or consular officer who has been accredited by a foreign government recognized de jure by the United States and who is accepted by the President or by the Secretary of State, and the members of the alien’s immediate family;

(ii) upon a basis of reciprocity, other officials and employees who have been accredited by a foreign government recognized de jure by the United States, who are accepted by the

Secretary of State, and the members of their immediate families; and

(iii) upon a basis of reciprocity, attendants, servants, personal employees, and members of their immediate families

‘‘(s) CERTAIN CHILDREN OF NONIMMIGRANT INVESTORS.—In the case of an alien seeking or that has status under section 101(a)(15)(E)(ii), notwithstanding section

(e) IMMEDIATE ELIGIBILITY FOR ADJUSTMENT OF STATUS OF CERTAIN LONG-TERM E–2 NONIMMIGRANT INVESTORS.—An alien who has been present in the United

States in the status of an alien described in section 101(a)(15)(E)(ii) of the Immigration and Nationality Act for not less than 10 years may be immediately eligible to adjust status to that of an alien lawfully admitted for permanent residence pursuant to the amendment made by subsection (a).

E-2 visa holders positively impact the economic and social state of U.S. citizens. Politicians in Washington D.C. are taking notice. To echo Congressmen Rutherford’s statement, Visa Franchise believes foreign investors deserve to stay in the U.S. on a permanent solution, based on their business and social impact. We will continue to monitor this bill and hope it will be passed by the U.S. Congress and Senate so that our E-2 visa clients can stay and continue to thrive in the U.S. indefinitely!

Patrick Findaro is the commercial director of Visa Franchise. He is a business advisor based in Miami, Florida with a focus on U.S. franchise and real estate investments. Patrick’s experience with Franchises, Real Estate, Investor Visas and Latin America brings significant value to foreign nationals seeking investments in the United States. He has the ability to manage an otherwise onerous process of immigrating through investment by partnering with trusted advisors and established franchisors. Moreover, his experience advising multinationals and high-net worth individuals on a wide spectrum of investments provides great market and financial analysis for prospective franchisees.

Visa Franchise guides investors in identifying and analyzing the best investment opportunities tailored to their specific objectives. The focus of the firm is on franchises that qualify for the E-2 and EB-5 visas. Visa Franchise is the trusted advisor of clients from all over the world when it comes to helping them find the business opportunity that best meets their investment and immigration goals. Visa Franchise takes into consideration their capability, experience, and size of investment to ensure that they choose the best possible option for their unique, individual situation. Visa Franchise is based in Miami, Florida with offices in Orlando, New York, Washington D.C., São Paulo, Mexico City and Buenos Aires. If you are interested in owning a franchise please reach out to info@visafranchise.com or call us at +1-888-550-7556.